We all love our furry friends and want to feel safe when walking them around the neighborhood.  Most people think about dog bites as being the most dangerous aftermath of an aggressive attack.  However, it is equally dangerous to walk a dog without a proper leash. Or to be walked by someone who is not the dog’s owner. If you receive injuries in a dog attack our Tulsa dog bite injury lawyers can help.

In Tulsa, and in many other towns in Oklahoma, all dogs must be “under leash” when they are walking in public.  This includes walking down the street or sidewalk in your neighborhood. The only persons authorized to walk the dog are one or more of the following:

An agent for purposes of controlling a dog while on a leash may be a dog walker that an owner hires to walk his or her dog, or it could be a friend.  An agent is someone acting on behalf of the owner.  Oftentimes, people don’t think about the consequences of allowing other people to walk their dogs.  While many dogs are friendly, if walking an unfamiliar dog, you won’t be able to predict that dog’s behavior. 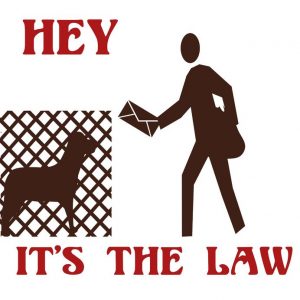 When walking a dog down the street, it is imperative that the dog be on a restraint. Consider the following true story:A man was walking his small dog down the street.  This was a routine habit.  He suddenly notices a large brown dog come running his way with three young kids chasing after it.  The man wanted to make sure the large dog didn’t hurt his own smaller dog.  So he stepped on the larger dog’s leash in an effort to separate this dog from his own dog.  As the man stepped on the leash of the larger dog, he realized the leash was not really a dog leash, but was a blue rope often used with fishing boats.

The three children that were chasing after the dog tried to pick the rope up to pull the dog back.  As the children pulled the rope, the man slipped and fell on his elbow.  He didn’t realize at the time the severity of his injuries.  The three children ran to tell their father of the injuries.  The father of the children told the man with the small dog that this larger dog was a stray.  He explained that his children were just walking this dog until the true owner was able to retrieve his dog.  The man then went home.  Subsequently he went to the hospital and learned he had severe injuries to his elbow.

This story teaches us two things.  First, only the owner of a dog, a family member of the owner, or an agent of the owner, should be walking the dog.  Unlike the situation above, where a stray dog was on a walk with three young children.  Second, dogs should have proper leashes, not rope to create a makeshift leash.  Had the father of the children simply left the dog alone while waiting for the owner, instead of allowing his three young children to walk it, the man would not have suffered injuries serious enough to require surgery and six months of physical therapy.

If you’ve suffered an injury as a result of an animal attack our Dog bite injury lawyers want to talk with you. Animal attacks are devastating to the victims. From medical problems to psychological damages, you’ve suffered damages. If you’ve been injured because of a dog bite you’re entitled to medical care. This includes all reasonable and necessary treatment. You’re also entitled to pain and suffering as well as compensation for missed work. For a free consultation with a personal injury lawyer call 918.743.2233