Temporary Custody Orders in a custody case mark the first custody leading up to a final order. If you and your spouse are heading down divorce or paternity lane, and you have children together, then you’ll have to work out a child custody arrangement. While most parents have plenty of time to figure out child custody – some need arrangements to be set in place right away. Fortunately, Oklahoma law provides you with an opportunity to obtain temporary child custody orders during your divorce or paternity case. Here’s what you need to know.

Can a Parent Receive Custody o

f Their Child Right Away?

In Oklahoma, the main way to receive child custody is by filing a petition (request) with the court for it. Although this is standard procedure in divorce and paternity cases, couples who are seeking a legal separation, or those who have never wed each other, are also entitled to petition the court for custody. Even people other than the children’s parents can seek custody through the court.

While a final custody decision is pending in the court, it may decide to award temporary physical custody of a child to one parent or the other. In this situation, as in all points of the child custody proceedings, the child’s best interests are always a top priority in order to ensure that the child can maintain their lifestyle (e.g. education, after-school activities, healthy relationships with family members).

Joint or Sole Custody on a Temporary Basis

In Oklahoma, as long as no custody order has been issued by a court, both parents are entitled to receive temporary custody of any of their children who have been conceived during the parents’ marriage. As long as the identity of both parents has been determined, either one can receive joint physical custody of the child until the court makes a more formal decision. If the child is born before the parents’ marriage, or if there is no marriage, then the identity of the father will have to be officially determined by the Family Court before custody is awarded by a judge.

Main Reasons Why Temporary Child Custody Is Granted The reasons why people seek temporary joint or sole child custody are quite diverse. Some reasons include:

· The parents are going through a divorce or legal separation and need to obtain temporary custody of the child while the final child custody order is issued.

· The demands imposed by a parent’s job makes it impossible for them to take care of their child.

· There is abuse or neglect in the household.

· There is a medical situation that renders the parents unable to carry out their responsibilities (e.g. parents are hospitalized or are in a rehabilitation facility).

Although all of these orders are granted temporarily, in some cases the court may determine that they should become permanent. 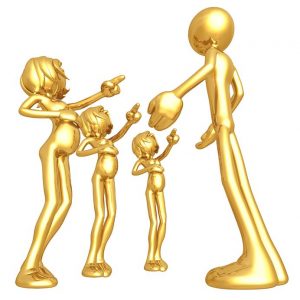 The Court Has To Establish Paternity Before Awarding Custody When the father has been named in the birth certificate, there are no issues with establishing paternity. However, in cases where there is no marriage or where the name of the father does not appear in the birth certificate, then the man who is seeking custody must first prove that he is actually the father. One option to accomplish this requirement is to obtain a DNA test.

However, having a valid Affidavit Acknowledging Paternity is not a guarantee that custody will be granted to the father. This means that if the parents of the child are unable to come to an agreement regarding custody, then the father would have to file a paternity case in order to be eligible to obtain a court order of custody.

Best Interests Of The Child When Determining Custody

Notably, the best interests of the child are closely examined by the court when deciding who gets custody. To reach that determination, the court analyzes several factors, among them:

· The expressed wishes of the parents.

Quality of the relationship between the child and their parents.

· Child’s involvement in school, religious organizations and the community.

Child’s relationship with grandparents, other relatives and other important adults.

Physical and mental health of each parent.

· Any evidence of child abuse or neglect.

The parent’s ability to provide for their child’s needs.

How much time the parent is able to spend with their child.

In some cases, and depending on the age of the child, the judge may also take into account the child’s expressed preference as to where they prefer to live.

For an Oklahoma court to determine whether it has the ability or jurisdiction to rule about custody, the child in question needs to have lived in Oklahoma for six months with someone who is taking care of them. Establishing the correct jurisdiction is a complicated problem, especially in cases where it is not clear whether the child has lived the required amount of time within the boundaries of the state.

A divorce is stressful enough for you to deal with. Unfortunately, a bitter child custody dispute on top of that only makes your situation worse. A skilled child custody attorney can ensure that you are prepared and protected. They can provide you with peace of mind in knowing that someone is looking out for your interests throughout this difficult process. Kania Law Office is devoted to helping parents when it comes to divorce, child custody, child support and more. We are here for you. For a free consultation, reach out to Kania Law Office by calling (918) 743-2233 or by contacting us online.